Well last week was a personal take on the categorization of indie design and craft– as it was personal and as I’m a graphic designer it was looked at from that prospective. I think it’s fair to say that in my world things are a little more black and white – if you’re a graphic design using your skill set to make graphic design pieces independently it’s pretty clear cut that you’re an indie designer. Any way I digress, today I’m still looking at the topic of categorization and not because I’m obsessed with pigeon holing, it’s just that I feel I have been labeled already under craft and that this label is misleading and dishonest for the work I produce. In some disciplines and for some creative’s the labels of indie design and craft could both easy apply and still not tell the whole story. These subjects sit between the black and white, in the grey. 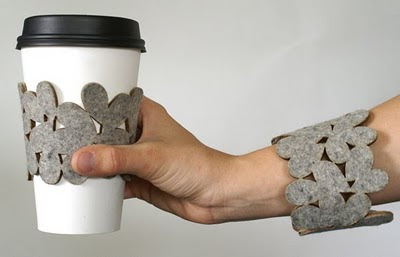 Fashion is a huge grey area and luckily Fridays post will be covering this in a lot more depth, so today I’m going to focus on the most saturated market in the ‘handmade’ arena – Jewelry. Firstly I would like to talk about the work of Megan Auman creator of the Cozy/Cuff shown about. The Cozy/Cuff is a coffee cup sleeve that doubles as a bracelet and vice versa, it has green cred as it saves you from using a cardboard sleeve on your take-away hot drinks and it’s (pardon the pun) handy because it’s easy to keep on your person, as well as being pretty to look at. Auman is what I would class as an indie designer – this is an ideas lead piece, it is laser cut by machine and although she may well do some hand finishing, it isn’t what you could traditionally call handmade and nor does it matter because that’s not the point of a design like this. It’s attractive, smart, functional and yet just like the next piece I’m going to look at still a piece of jewelry.

Clare Stoker is a maker at the other end of the jewelry spectrum – see above. It’s not that she hasn’t put thought into her work but she is clearly more engaged with the materiality and textures of her pieces than the pursuit of communicating a ‘new’ or ‘original’ idea. I can clearly see that her work is informed by a long history of arts and crafts and although modern it has a feel of celtic or medieval jewelry. Her work revels in showing the un-uniform marks made by the maker’s hand. The craft of making the item is integral to the finished look and feel of the piece. Her jewelry is beautiful because of her skills as a crafter.

Both Auman and Stoker could be called jewelers but the methods by which they make their work could put them into different categories when it comes to talking about indie design and craft. To make maters even more confusing there are also designer/makers who cross over into both camps, Andrew Lamb definitely fits this bill – work shown above. He designs and makes world-renowned jewelry inspired by his interest in Illusion and visual effects. He was so keen to trick the eye that he invented a new metal forging technique, which bonds together gold and silver wire meaning that his jewelry changes colour depending on the angle it is viewed from. He’s a man on a quest to create something new but he’s also a skilled maker, seeing his vision through from concept to carefully crafted finished piece.

Maybe makers like Lamb need a whole new category or maybe-hopefully their vision and work stands on it’s own. I think that’s an idea all us creative’s might aspire to, just being excepted and known for our work, but I fear human nature and Google tagging doesn’t quite work that way - not yet at least.