let’s call a spade a spade

I’m two days late in publishing this article for once not because I couldn’t make the time it’s just that I keep writing and rewriting this piece trying to perfectly articulate what I’m trying to say. I’ve decided that rather than writing everything I’m going to try and say it as simply as possible and then go into finer detail over the coming weeks hopefully with some feed back from anyone good enough to read this.
below, Robert Brownjohn's - Peace Poster 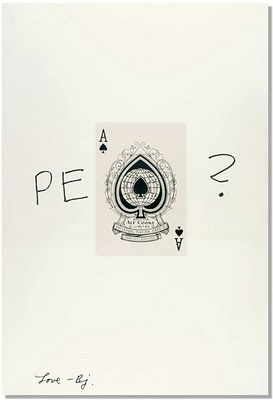 Well I’m coming out! I’m not a crafter, I’m a designer - this is the word I would use first and foremost to discribe myself. It’s not just a job it’s who I am. When I look around this world I see the marks of designers everywhere; in the cloths we wear, in buildings, in cars, even the way the streets are laid out. Being a designer is not a very tangible thing – us designers often spend a lot of time thinking, planning and laying the groundwork for others to go and do. We rarely physically produce anything ourselves – for example an architect doesn’t build the skyscraper.

This is why I’ve be feeling some what uncomfortable ever since I opened my online shop selling in a handmade market place because I really don’t hand make. If I had to pigeon hole myself I would say I’m an indie designer – this term simply means that I’m a designer who works independently from any clients or companies. I would also say that a good percentage of the sellers on etsy are in fact indie designers as well. I have nothing against craft and I can also see that there are grey areas between the two, just like there are grey areas between craft and art or art and design. What I do take objection to is how weak us indie designers seem to be at flying our own flag and that’s what I’m aiming to address from now on. I want to make this a space to showcase, debate and just be proud of the best in indie design. In the coming weeks I will look at the grey areas, the ethics and the skills displayed by indie designers.

Mondays will be an article day looking at and debating all things Indie design. Wednesdays will be the show case day featuring and sometimes interviewing designers. Finally I'm very excited to be introducing Evie Kemp who’s going to be writing a fashion Friday slot - sorry I've moved it a day Evie:)

This is a huge undertaking for me as I barely have any spare time as it is, not to mention that I'm hopelessly dyslexic but I deeply believe it’s important to make a space purely dedicated to and for indie design.